CIS gamedev job market overview: the number of vacancies dropped by a third in autumn

Our analysis included 4458 vacancies from key job and industry portals for September-October 2018, which is almost 30% fewer job offers than there were in summer of this year.

The breakdown of job offerings by months is almost equal – about 1500 per month. The lowest number of vacancies posted by employers was in October: 1393.

Who companies were looking for

In autumn, in the CIS labor market as a whole as well as in individual countries, the largest number of vacancies were for developers, at 1489 (33% of the total). Take note of the fact that the total number of offers for them has decreased by 44% since summer.

As before, not all employers specified the specific technology or area of work in the job description. However, the largest demand in autumn was for Unity developers. 30% of employers were searching for Unity programmers in September, and in the following months, demand for them decreased to 23% in October and 15.5% in November. The second most popular was C++. Demand for specialists familiar with this technology remained stable throughout the entire autumn at around 16-17%. 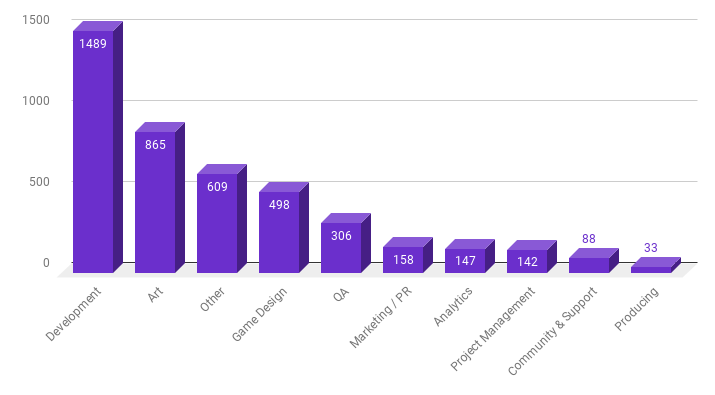 The second most in-demand area in autumn, just as in previous periods, was art specialists: 865 job offers (19.4% of the total number of vacancies in the market). The percentage of job offers for artists out of the total number has not changed. The most desired area of work was 3D art, and not 2D as had been the case in summer.

Employers’ interest in QA also went up slightly. The share of the number of offers in this area shows a minimal, but still positive growth trend of +0.5%. During autumn, QA specialists could choose from 306 open positions.

Where demand for specialists in other areas is concerned, in November it was minimal for almost all the below-listed professions.

In general, during autumn 2018, job offers were distributed as follows:

Note that in autumn there were a lot more offers for non-core directions (Other) than there were in summer. This category’s share increased from 3.8% to 13.6%. This includes a variety of positions: from department head assistants and video production or sound specialists, to HR and recruiting specialists.

Incidentally, employers began to specify the required specialist level more often than they did in the summer. This data is present in 24% of all surveyed vacancies, compared to 21% total over the summer months.

Vacancies by Level of Seniority (Autumn 2018) 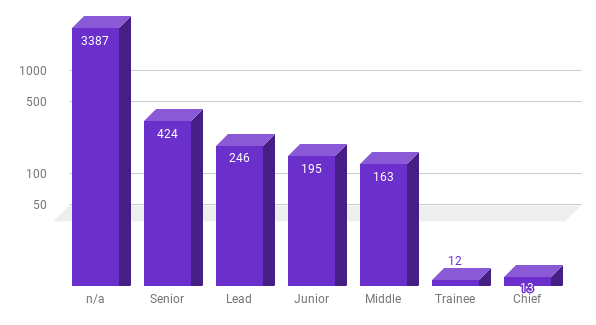 To get a complete picture of the labor market, we offer data on monthly trends and trends by country (key areas).

Job offers in key areas from employers in CIS countries 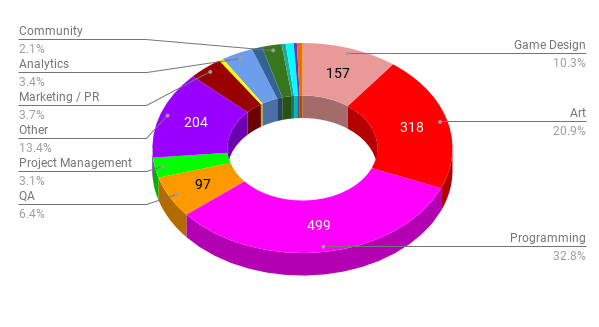 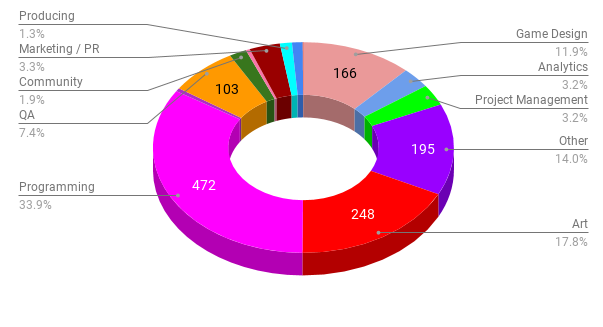 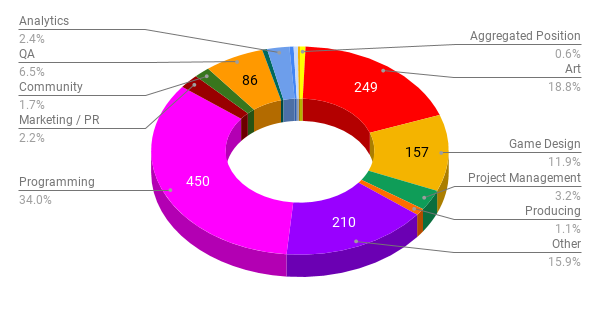 While there were no significant changes in key areas (programming, art, game design, and QA) for the CIS as a whole, there were some curious changes in the breakdown by country.

Job offers from employers in key areas (by country) 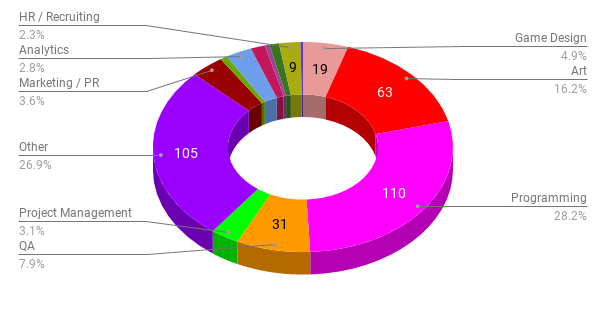 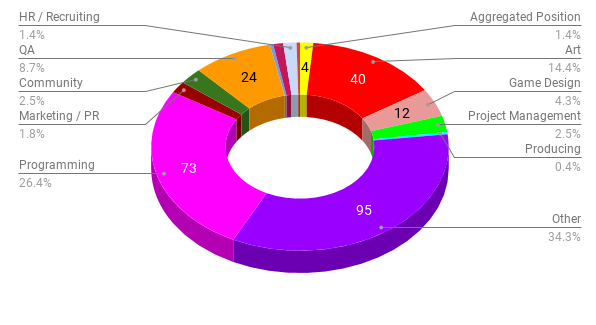 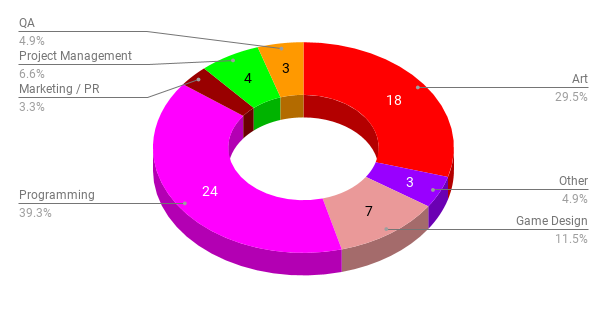 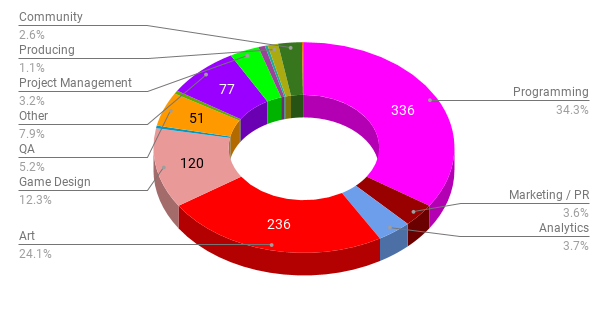 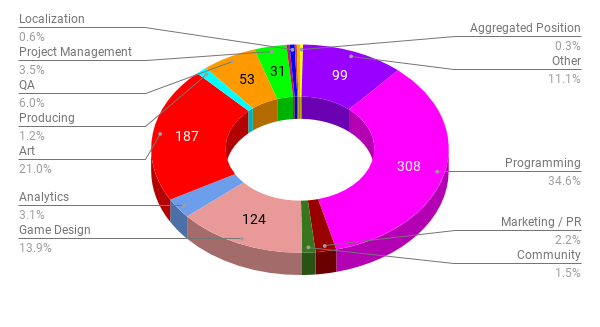 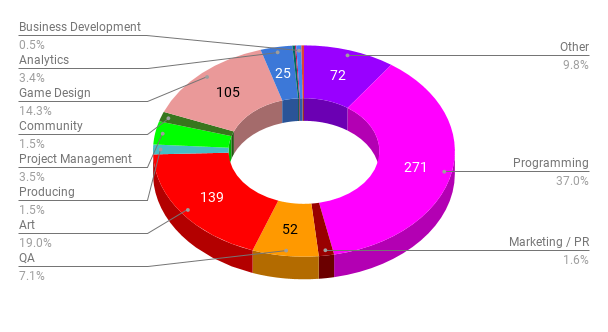 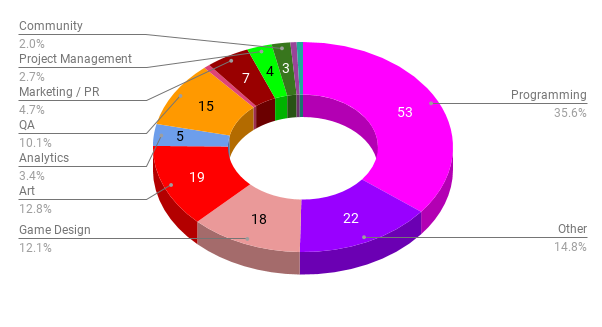 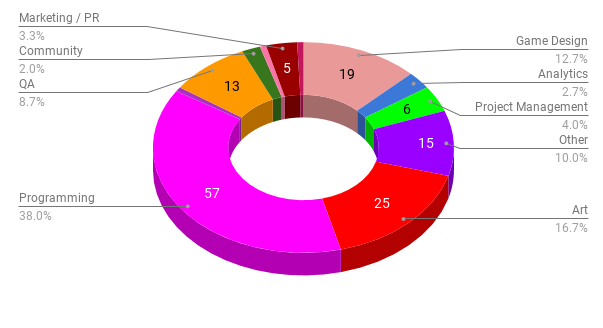 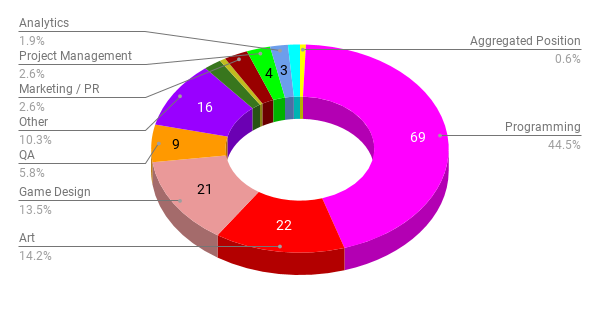 As in the previous periods, in autumn we also created a ranking of the most active companies by number of published job offers (on key portals). 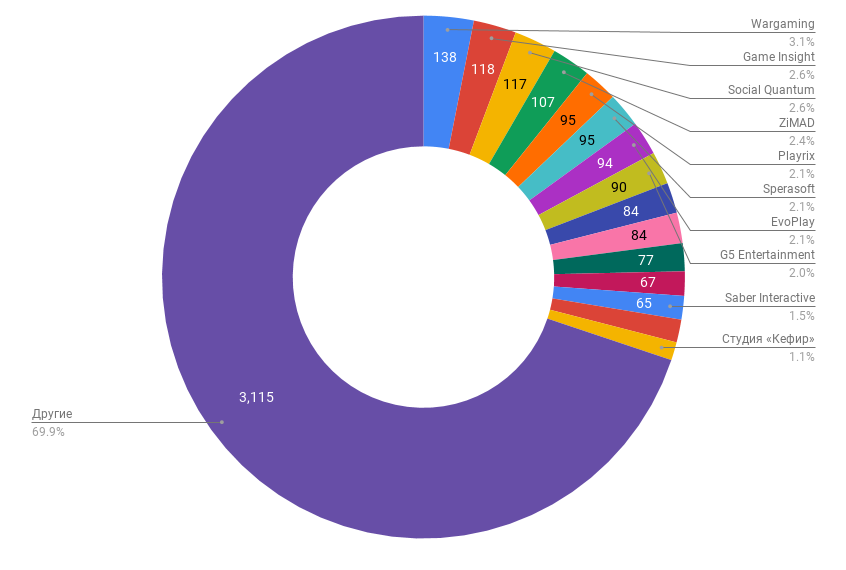 By number of job offers, these companies combined had 30% of the total number of positions on the market (in the analyzed period).

The top three have changed. While Playrix, G5, and Social Quantum sought more specialists than any other companies in summer, autumn has been dominated by Wargaming, Game Insight, Social Quantum, and ZIMAD. Note that Playrix and G5 have cut their search activity in half.

While spring saw a boom in art specialists and summer was for game designers, in autumn, demand for art and game design was equal, amounting to 30% for each area. Analysts were a little less popular, accounting for 20% of requests from employers. 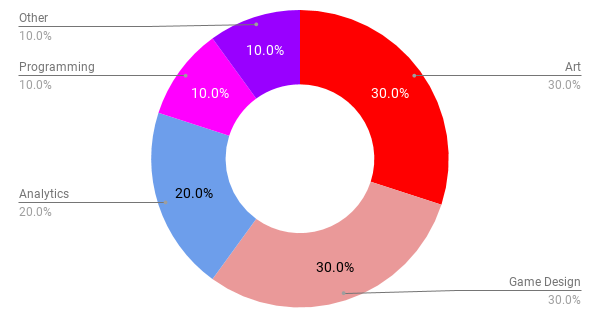